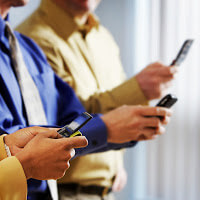 There is power in paying attention. And a power is released in someone who knows he or she is being paid attention to.  ~Nancy Ortberg
I had a conversation with a woman last week that has stuck in my mind. She told me to use a specific email address when contacting her because she checks that email about every six minutes. That’s right, every six minutes. I can attest to her accuracy because I sat next to her during her organization’s staff retreat. Her smartphone never left her hands and she did check it about every six minutes and was responding to emails. Now, in her defense, she recently spent a number of years working for Bill Gates and had clearly assumed the habits that were required, or really demanded, of the job. She had to be “on” 24/7. But old habits are clearly hard to break. Did it feel like she was paying attention? No. Maybe she really could multi-task but you certainly didn’t feel as if you were being paid attention to.
I recently did a little experiment of my own to see how intently someone was focused on their phone as opposed to paying attention to the environment around them. I was walking my dog on a Saturday morning. We had stopped along the sidewalk so my dog could explore all the many things to smell in the grass. I saw a young woman walking towards us, about half a block away. She was extremely engrossed in whatever she was emailing or texting and coming straight at me. No one else was around. I decided to just stay right where I was on the edge of the sidewalk, not say anything, and see if she would lift her head to notice I was standing directly in her path. Nope, she didn’t, and slammed right into me. Did I receive an apology or an “excuse me”?  No.  Instead I got a glare of frustration that I was in her way and she continued on.
So what’s this got to do with leadership?

Sometimes I wonder if organizations look a little like my Saturday morning dog walk. We’ve not only lost the ability to really pay attention to one another, we’ve lost sight of thepower of paying attention to one another as Nancy Ortberg so aptly pointed out. How many times have you sat in a meeting only to see everyone attempting to discretely check their email under the table? Or my favorite, apparently it’s now acceptable to suddenly leave the room and take a phone call. The convenience of technology has robbed us of our ability to pay attention to those in the same room sitting next to us. And we’ve forgotten the power of paying attention.
I haven’t done this, yet, but with each meeting I attend I become more and more tempted to start carrying a large bowl with me and then require everyone to deposit their iphone, smartphone, blackberry or whatever their preferred device in the bowl. Everyone can retrieve their device at the close of the meeting. But for the duration of our time sitting together, in the same room, we’re going to release some power and pay attention to one another.
Going back to Nancy Ortberg, the complete quote from her reads:

There is power in paying attention. And a power is released to someone who knows he or she is being paid attention to. Someone did it for you once. Now it’s your turn.