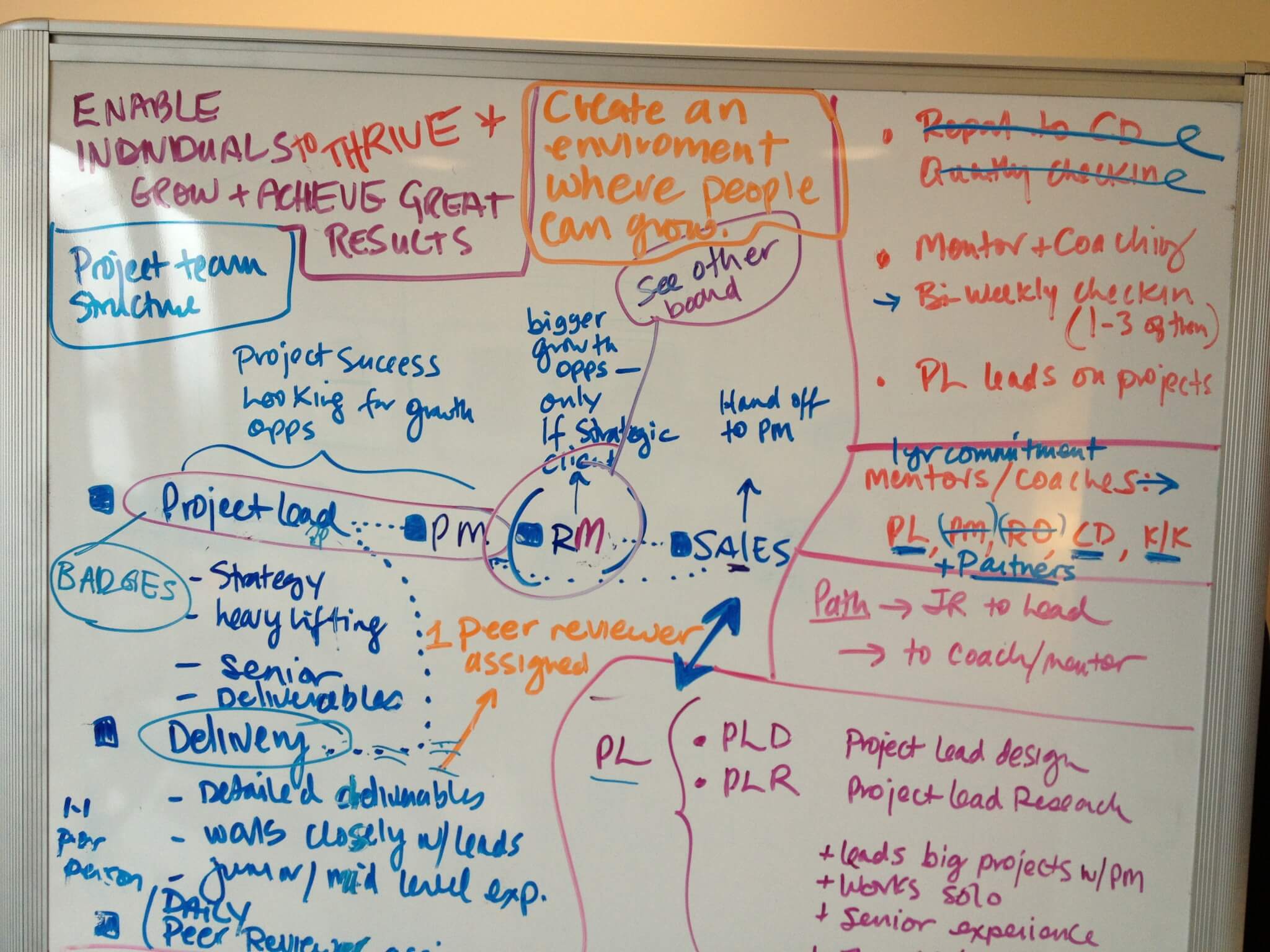 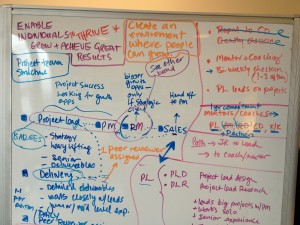 Clark Cole’s movable whiteboards allowed her to improve the strategy “on the go.”

By all outward signs, business was booming at Blink UX, a Seattle-based user experience research and digital product design firm: 287 percent growth in three years, with 53% in 2013 alone as the industry picks up speed. But CEO Karen Clark Cole was beginning to hear rumblings of discontent.

Like many small businesses (Blink has approximately 45 employees), Blink was struggling to provide a career path for their high-performing team members. “People were beginning to find limits and leaving,” Clark Cole says. Talented consultants wanted to be promoted to the project director (management) level, but, “You can’t bring on a new director until you have the projects to support the role. It was a cart and horse issue.”

Because project directors controlled so much of  a project’s activity, some consultants found themselves working to please them instead of focusing on the client’s needs, and not feeling personally responsible for the overall success of the project and their work.

Clark Cole knew she needed a solution that went beyond just promoting one individual. “We want people to be planning their retirement at our company,” she says of her highly-skilled workforce. (Most Blink employees have a PhD or a Master’s degree.) She needed a sustainable long-term solution that would create a company with no limits to an individual’s personal growth trajectory.

After many months of building her idea, she got buy in from the executive team to shake up the existing model entirely. “I started questioning the director model, and that freed me up to rethink the whole company structure. Because we had that model in place successfully for over 12 years, it wasn’t at first obvious to me that it was part of the problem.”

Clark Cole decided to create an organization focusing on people’s roles and areas of practice, rather than titles (except in a few circumstances). They also got rid of formal reporting structures and asked everyone to manage themselves and take full responsibility for their work and exceeding client’s needs. Now, team members play different roles on each project, as long as they have the potential to perform that level of work. Coaches are assigned to team members taking on a new role for the first time, to ensure the project (and the person) are successful.

“I’m betting the farm that the quality of our work will go through the roof, our culture will blossom, and people will stay with us for a long time.”

“We used to resource projects based on who was qualified right now; it’s a subtle shift, but a world of difference for people’s individual growth and the company’s capacity for people to lead projects.”

A rotating “GROW group” meets weekly to “match” people and projects. They also flag any concerns and most importantly, look for growth opportunities for each individual. Employees are compensated not by title, but by the highest level of their contribution.

“Now everyone is more empowered and enabled, and can make a direct difference to each other and their clients.” Clark Cole says.

As the plan crystalized, Clark Cole met with people in small groups and many individuals, “I had a white board on wheels I would drag around with me,” she says. “In the end, it became a massive, collaborative effort rather than one-person’s idea.”

It’s a radical shift that caused more than a few raised eyebrows. To further develop the idea and earn buy-in across the company, Clark Cole met with every single employee in small functional groups when the time came to roll it out. Adding to her presentation live on-screen as good ideas and questions emerged from everyone.

Should You Get Rid of Titles? Advice from Jim Collins & Others

Around the same time, she hired a company leadership coach to help individuals with big goal setting. Clark Cole also meets twice a year 1-1 for an hour with each person in the company to help refine and grow each person’s goals for themselves within Blink. After the roll-out it became much clearer how the new structure would enable each person to develop endlessly as a professional.

“We’re moving from a model where leadership is given through a title, to one where you have to earn leadership,” Clark Cole says. “You’re a leader when people want to follow you.” She had to reassure many people that the leaders will naturally emerge without the titles.

In her 1-1 meetings, Clark Cole challenged each team member to identify something they feel passionate about (that aligns with the company’s vision and values), with an eye on becoming a thought leader in that subject area. Team members are encouraged to spend time each week focusing on their area of interest. “I want them to become the expert on an area of expertise that they are passionate about,” she says. “They could become the ‘go-to’ person in the office, write a book, or the keynoter at a global conference. Blink will support you and help you develop a plan to make it happen.”

The results? It’s too early to tell, Clark Cole says. “But people are literally skipping down the hallway.”

“There’s nothing in front of me to guarantee it,” she says, “but I’m betting the farm that the quality of our work will go through the roof, our culture will blossom, and people will stay with us for a long time.”

Amber Johnson is the Center’s corporate relations advisor and a marketing and branding specialist. Read more on this story at Should You Get Rid of Titles? Advice from Jim Collins & Others