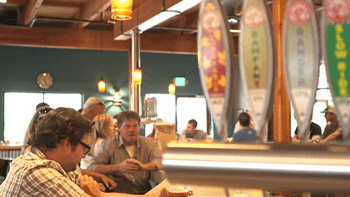 Learn how the decision to become an ESOP positively impacted business outcomes in this short video, part of the Return on Values Project.

Find more great videos from the Return on Values Project.

SOLD: How New Belgium Brewing Sold the Company to the Employees – and Became More Successful in the Process

>> Andrew: So up until 2013 we had 41 percent of the company in employee stock option plan. And at another all company meeting in 2013, Kim got up on stage and passed out envelopes to everyone and said we sold the company. And the air, as you can imagine, was completely sucked out of the room. And she said, if you open your envelope you’ll see who we sold the company to. So, holy cow…it’s kind of a big moment. So everybody opens their envelope and inside the envelope was a mirror to signify that we’d become a one hundred percent employee owned company.

>> On screen text: SOLD: How New Belgium Brewing Sold the Company to the Employees – and Became More Successful in the Process

>> Kim: We looked at strategic buyers. We looked at management buy-outs. We looked at the ESOP. And we spent about three years really sort of researching, because you’d answer one question and another one would come up.  And so after three years we felt like for New Belgium the best option was an ESOP buy-out.

>> Christine: And when we landed on the ESOP it was like, yep, that’s the ticket. That’s what we need to be doing. That’s the right thing for New Belgium.

>> On screen text: Selling the company to the employees has produced unexpected benefits.

>> Victor: We have an all staff meeting every month where we openly share how we’re doing. Here’s how sales is doing. Here’s the profitability of our sales. Here’s how much we’re spending on sales and marketing, and that’s really great for everybody to understand that. I think, as employee owners, we do own the business so we have to know what drives a business.

>> Laura: As an employee-owner, I feel like I have a bigger responsibility to watch how much I spend. I’m developing a wellness program. I need to make sure it’s gonna be effective…people are going to attend and the money I put into it is gonna be an investment and it’s gonna be well used.

>> Lucie: Every dollar saved is a dollar of profit for every employee. There’s not a lot of waste here. You see us, when paper gets printed you see us turn around and use that as scrap paper. I mean, that’s one small example but we do that on a larger scale.

>> Matty: And so then nobody has to hold them accountable because they’re not doing their job. They are invested in doing the best job they can.

>> Christine: We’re all co-owners. We all do this thing together. There’s just a different level of working together you get in a company that’s co-owned than in any other capitalization strategy in my opinion. We talk to our auditors sometimes and they’ll say, what about your internal controls and making sure people aren’t stealing, and we sort of chuckle because we all hold each other accountable. There’s no sort of like sticking to the man, because you’re sticking it to yourself. Right. You’re an owner. I’m an owner. So it gives a very different way of running a business.

>> Jenny: Happy people are more productive people and there’s lots of academic research out there that says employee owned companies with an employee ownership culture are more successful over the long run than those that aren’t.

>> Christine: So when you empower people and you have ownership and you give them say, they show up differently and that absolutely goes to the bottom line.

Whether you’re rethinking your company’s formal ownership structure, or just want to create an environment where every employee is trained to think like an owner, the following questions can help you consider what’s right for your organization.