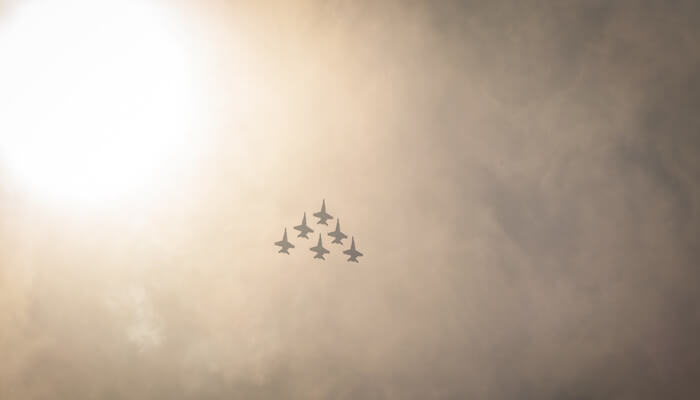 Editor’s Note: In honor of the men and women who have served our country through the armed forces, we asked U.S. Air Force Lieutenant Colonel (retired) Dr. David Smith, a graduate of our doctoral program and now a senior analyst with Booz Allen Hamilton, to share a story drawn from his experience of leadership in the military. David’s story reminds us of the importance of acknowledging our own imperfections.

In the fall of 1990, I had just graduated from the Air Force version of what most civilians know as “Top Gun” school.  Graduating from the Air Force’s Fighter Weapons School meant you were among the top few percent of USAF aviators, and I had an ego to match. My job was to fly in the back seat of a two-person reconnaissance jet, providing navigation, operating the radar, and taking pictures of the enemy installations and assets .

We were deployed for the first Gulf War, and the conflict was gaining steam. Operation DESERT SHIELD, the name for the troop and supply build up, would soon transition into the combat phase, DESERT STORM. Stress was high. My peers and I were flying reconnaissance missions; and we’d lost two of our friends on a just training flight.

But the tension was more than just the military conflict; we were also experiencing some strife within our squadron.

When not on the clock, some members of the squadron were blowing off steam.  As a result, our leaders made some new rules about off-duty behavior. Then, within 24 hours, some of the senior leaders broke some of their own rules.

Shortly afterward, some friends and I were discussing this in our living quarters when the Squadron Commander came in.  He was a respected aviator, with many years of experience.  He was known to be fair, had an easy going personality, and was well liked in the unit.

He asked how things were going, and what we thought of the current situation, meaning the loss of our two friends and the general stress in the unit. The commander was a Lieutenant Colonel, two military ranks  above me – I was a Captain at the time. But, being convinced of my own super-insight, I decided to speak freely.

“There is no leadership by example around here,” I said, not mincing words. “And until you can do that, none of the management techniques will work.”

My buddies in the room were shocked. “I can’t believe you lectured him!” they told me later. But to the Commander’s credit, he took my clear and direct message and didn’t punish me for speaking my mind.

When values-driven leaders are at their best, they create an environment where anyone, no matter their rank, has permission to speak freely around the issues that matter most. The culture among USAF aviators demands that, when necessary, you say what needs to be said to someone who outranks you. By doing so, we reduce risk and create opportunity for improvement.

But we can only accomplish this when we are willing to see imperfections clearly. For me at the time, it was easy to see the imperfections of the leadership’s approach to handling issues. Less clear, in that moment, was the imperfection of my own approach. Looking back, I know my motives were mixed: I believed what I said, but it was also grounded in my frustration at the death of two friends, and at the tensions of squadron dynamics.

Admitting My Own Imperfect Leadership

Time passed, I left the military for a while, but rejoined after 9/11.  Eventually I became a Squadron Commander, and a Lieutenant Colonel. Instead of leading a combat flying unit, I commanded a computer support squadron. Newly in command, I was eager to be a values-driven leader.

The Air Force, rightly, was trying to eliminate drunk driving – and I fully agreed.  At every large group meeting, I preached the message “don’t drink and drive.” I would tell my airmen, “I’ll gladly come get you at a bar at 2 am, with no repercussions. Just don’t make me get you out of jail, or out of the morgue.”

Every member of the squadron had a small card with my cell phone number, and that of my deputy and my chief.

We had a golf tournament on base, and there was a beer cart. By the end of the tournament, one of my guys was really looking toasted. I knew he was boarderline on his ability to drive – maybe past boarderline. I watched him a few minutes, and said to myself, “He’ll be fine.” We all left.

Striving to be a values-driven leader is a journey. Sometimes you do well, sometimes you don’t. … But the point is to strive, admit your mistakes, and keep striving.

Later that night I realized what I had done: let him drive when he should never have had been behind the wheel.  Fortunately, this is a story that ends well.  I found out early the next morning that he had driven only a mile to a parking lot on base where he could sleep off the effects.

The next day I called him into my office, and I could see the worry in his eyes. He knew he’d not behaved appropriately, and he knew I should call him on it. This is the point, in the movies, where a soldier stands at attention for 10 minutes while his commander yells at him.

But I couldn’t do that, because I had failed to protect him. I realized that I hadn’t lived up to my word; I was no better than my own commander, years before, whose imperfect leadership set a poor example for our squadron.

So I asked him to take a seat. He looked puzzled. “Pete,” I said, “you obviously messed up, and you will never do this again, right?”

“Yes, sir,” he said, with conviction.

And then I told him the real reason I’d brought him to my office that morning. With as much authentic humility as I could, I said, “I’ve called you here because I owe you an apology.  I put my convenience over your safety and your career – and on top of that, I’ve been the one saying, ‘call me if you need a ride’.  Pete, I let you down, I apologize.”

He was shocked. I learned later my apology made an impact on him. By admitting to my own imperfect leadership, I had a greater impact on Pete (not his real name) than I ever had in my months of being his commander.

Admitting our mistakes is a powerful way senior leaders – in the military, or out – can impact lives, provide direction, and shape the culture and success of the teams we lead. My military service offered many examples of truly great men and women who led competently and with a deep sense of humility. I was honored to serve alongside them, and under their command.

My final observation of humble, imperfect leadership is that it has to be practiced with perfect consistency. Nothing creates distrust and doubt more than inconsistency. (My short video, shares an example of this – drawing from a real-life spy thriller as an example.)

Values-driven leadership is humble and consistent leadership. Your direct reports or team members do not need perfection. They can learn more from your mistakes.

For more from the Veterans who are executive students in our program, please visit cvdl.ben.edu/veterans.