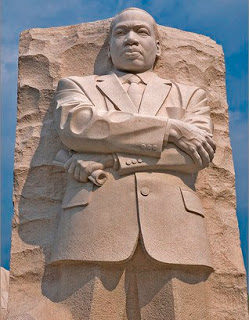 ———————————————————–
Dr. Kathryn Scanland is the president of Greystone Global LLC, a consulting firm focusing on strategic planning, leadership development and organizational design. This post is republished with permission from Tuesday Mornings.
———————————————————–
Faith is taking the first step even when you don’t see the whole staircase.  ~Martin Luther King, Jr.
I’ve often thought that the best leaders are both right-brained and left-brained people. They are creative and analytic; feeling and thinking; out-of-the box and pragmatic. What pulls the two extremes together, as MLK stated, is faith.
Synonyms of faith are confidence, trust, conviction, belief, devotion, loyalty, and assurance.  Sounds like a list of character traits that describe Dr. King. As I paused this week to remember and recognize Martin Luther, I was once again struck by his uncanny ability to articulate a vision—which we can still quote nearly 50 years later—and his faith to take the first step when he wasn’t able to see the whole staircase.

I’ve facilitated a strategic planning process for many organizations; the process typically begins with developing a vision. Then what happens next fascinates me. We start to develop goals or initiatives or priorities or whatever term you want to use. These are five or so priorities that need to be accomplished over the coming three years to reach their vision. When we start to put a timeline to each of the various priorities and then objectives, a vast majority of the priorities/objectives end up with a timeline to be completed in the next three months and sometimes it stretches into the next year. It’s very rare that anything is identified as being accomplished in the next two or more years.
Why do I find this fascinating? Well, if the vision can really be accomplished in the next few months then is it really all that visionary? Or, if our vision is really visionary, do we only have enough faith to take us up the first couple of stair steps? When we’ve reached those first few steps, will we keep going? In my experience, this is where I’ve seen many organizations simply stop. They accomplished what they could identify as the first few steps but there’s still a lot of staircase to go before they reach their vision. Do they have the faith to not only take the first few steps but to keep going beyond the steps they can see today?
Many of the individuals and organizations we’ve come to admire are those who didn’t stop working their way up the staircase; even when they had made their way up the steps they could see at the beginning, they didn’t stop there, they kept going. Thomas Edison had more than 1,000 failed attempts to create the incandescent light bulb before he succeeded at realizing his vision. The Apple III was considered a complete failure. They went back one step to Apple II, reevaluated their plan to phase it out and continued on with its development. It’s been estimated that roughly half of the major ventures Steve Jobs engaged in simply didn’t pan out. The magnitude of his failures, and his ability to recover from them, demonstrates what can be realized if we keep making our way up the staircase. Nelson Mandela spent 18 years in prison, but that didn’t cause him to waiver in his vision. After his release, he plunged himself wholeheartedly into his life’s work, striving to attain the goals he and others had set out almost four decades earlier. He kept going.We may never see the entire staircase, but if we allow faith to be part of the equation, we may make it farther up the staircase than we ever thought possible.
Previous ArticleNext Article