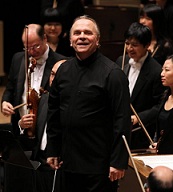 When we connect with others through our framing, we shape reality.  What’s more, if we “manage meaning” when others are unable, we emerge as leaders.  ~Gail T. Fairhurst

This past week I experienced one of the many perks of living in downtown Chicago – a night at the Chicago Symphony Orchestra (CSO).  The musicians casually filed in, warmed up their instruments, carefully tuned following the first violin’s lead, and then quietly and reverently waited for the conductor to enter.  He enters and is welcomed with applause. The conductor could have turned his back to the audience, raised his arms, and began the first piece. But he didn’t.
Instead, the conductor turned to the audience and described the first piece in great detail.  He told us about the composer, Dvorak, and how the piece was written toward the end of his life. He went on to describe the visual images throughout the piece, what we would sense, how it would flow, and what was being communicated throughout the music.
All of this reminded me of the very important and artful skill of leadership that we many times rush past – framing.
As Fairhurst states, we shape reality when we take the time to connect through framing. Framing might be accomplished through a story, a metaphor, visual images, or group exercise. As an example, it’s taking the time at the beginning of a meeting to set the stage. On several occasions when I’ve known that those in the meeting have varied opinions and the discussion could create tension, I tell the fable of Three Blind Men and an Elephant.  It acts as a reminder that even though we may see the situation from different perspectives given our individual experiences, that doesn’t mean any one of us is right and all others are wrong.
Framing can better prepare individuals for an effective meeting and framing can also communicate vision and priorities. I recall a meeting with a college strategic planning committee that was struggling to articulate their collective vision. At one point, the president (finally!) stated his vision through framing and it seemed to connect with the committee members. Then the president, somewhat stunned at their surprise, said, “That’s what I said in my inaugural speech three years ago.”  Somehow, he thought he could frame his entire tenure as president in one speech at his inauguration. Framing vision and priorities is something that leaders must do constantly, not once a year at an annual meeting, or once in a career.
One of the most effective examples of framing might be Martin Luther King’s I Have a Dream speech. The vast majority of the speech was framing. He was “managing meaning” when others were unable. I’ll admit few of us are orators even close to the likes of Dr. King. But we can each find our individual art of framing. My church has a periodic guest speaker who uses visual aids in the form of props to an extreme.  But he uses those props to “manage meaning” and frame his message. I recently heard a speaker who artfully used fables to frame complex ideas.  I frequently facilitate meetings with leadership teams and I try to come up with a participative exercise that sets the tone and direction for the meeting.
Back to my evening with the CSO. Because the conductor took the time to “frame” each piece, I have no doubt that my concert experience was much richer had he not taken the time to shape reality for the audience. Bravo, CSO, bravo!
———————————————————–
Dr. Kathryn Scanland is the president of Greystone Global LLC, a consulting firm focusing on strategic planning, leadership development and organizational design. This post is republished with permission from Tuesday Mornings.
———————————————————–
Previous ArticleNext Article