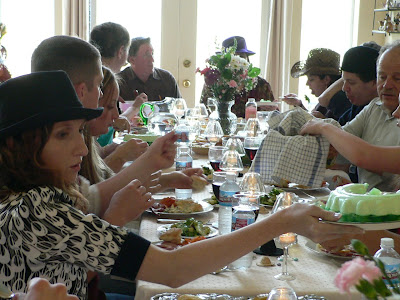 Leaders are conversation at the dinner table; try not to spoil everyone’s appetite. At the end of the day, try to make certain that no one is going home wishing that you weren’t the boss or worse, wishing that they were employed elsewhere.  ~Sony Singh
I remember about 20 years ago I was supervising someone and I have no doubt I was dinner table conversation.  It didn’t help that we could not have been more different from each other.  I was a young woman in a white collar position; he was a man approaching retirement in a blue collar position; I put a high value on productivity over loyalty or longevity; he put a high value on loyalty over productivity.  And that’s just the start of the list.  After I had been supervising him for several months, one of the VPs at the organization was kind enough to tell me the high level of stress I was creating in this man’s life.  He would literally get tense and upset just at the sight of me.  I had no idea; but what a learning moment.
I’m not advocating that leaders should become close friends with everyone following them.  However, if your followers are going home and spending time at the dinner table venting their frustration with you, especially to the extent that they wished they were employed somewhere else, then that really should give you pause.
In my scenario, I certainly did pause.  I tried to see things through his lens or his worldview.  It was hard, really hard.  We were of two different generations, genders and genes (i.e., values).  I tried to assure him that he was truly appreciated, something I hadn’t done nearly enough.  I tried to be very sensitive to how I was coming across.  But in all honesty, I don’t think his anxiety decreased until I moved on to another organization.  I’d like to think that 20+ years of experience and having failed a few more times would enable me to handle this same scenario much differently today.
A client also comes to mind.  This particular leader viewed herself as the one person in the organization who was willing to make tough decisions. In reality, most everyone viewed her as controlling, unwilling to listen and I suppose rude. She too was likely dinner conversation.
Thinking about several examples, including my own, I believe that leaders become dinner conversation (in the negative sense) when they are least self-aware. It may even be when we have the best intentions, but at the end of the day and at the dinner table, what matters is how our intentions were both perceived and received.  Sometimes we’re distracted, preoccupied or just simply out of touch. We forget to stop and think about how we’re coming across.
Warren Bennis, author of leadership classic, On Becoming a Leader, said, “The essence of leaders is placed firmly in issues of character, on who we are, on self-awareness.”  Other bloggers have noted and I’ll join them in saying that self-awareness is not a one-time event, or some exercise or courses we engaged in when we first accepted a leadership position.  Self-awareness is an ongoing learning process that never ends.  It’s those who choose to keep working at it who become truly effective leaders. After all, if we’re going to be dinner conversation, we might as well be adding to the enjoyment of the meal and not spoiling anyone’s appetite.
———————————————————–
Dr. Kathryn Scanland is the president of Greystone Global LLC, a consulting firm focusing on strategic planning, leadership development and organizational design. This post is republished with permission from Tuesday Mornings.
———————————————————–
Previous ArticleNext Article