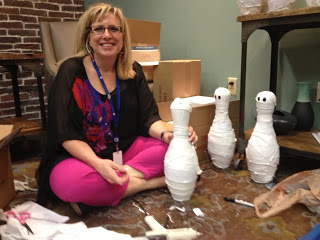 My wife Beverlee and I have been married for nearly three decades; I have to tell you – we got lucky.
Through a lot of trial and error and forgiveness, we’ve stumbled onto a way to make our relationship work. No one sat us down, in our early twenties, and said, “Here’s the way to make your life together a happy one.” There wasn’t a class we took, or a set of iron-clad principles we followed. Instead, we found our way by following the example of a few good marriages around us, by taking a little of the advice we read in books, by fixing what was broken and discarding what didn’t work and laughing as much as possible.
This may seem, at first glance, to have very little to do with creating a positive business culture – but more times than not, this “stumbled onto” method of making things work is exactly how the leaders I meet with have succeeded.
I was reminded of this recently when we did the first of 30 deep-dive case studies into values-driven companies, as part of the Return on Values initiative (a partnership of the Center for Values-Driven Leadership and the Small Giants Community). For our first case study, we decided to go to BerylHealth, run by CEO and founder Paul Spiegelman.
Beryl is a remarkable place – I was blown away by the deeply-ingrained positive culture Paul and his team of exceptional leaders have created. But here’s the thing: no one told Paul how to be a values-driven leader. He stumbled into creating a great culture much like my wife and I stumbled into creating a solid marriage: by trial and error and common sense.
As part of the more than three hours of interviews we did with Paul, my research team asked if he had a formal theory of creating culture. “Nope,” he said. “No real theory. We just do it.”
What one of our researchers, a Ph.D. student in our doctoral program, noticed was that the process of embedding culture that Paul and his colleagues employ mirrors the well-researched and documented process identified by organizational theorist Edgar Schein in his book Organizational Culture and Leadership. He writes that there are six primary mechanisms for embedding a positive culture:
After three days of interviews, I could tell a Beryl story for each of those six points above. You should know that Beryl’s senior leaders measure everything you’d expect of a typical call center, including profit and loss by each call center team. But instead of paying their staff by the number of calls taken – which encourages people to move through calls quickly, even if you’re not thoroughly meeting the caller’s needs – they pay their staff by the minute, giving employees the freedom to truly care for the caller.
When the company’s financials were down one year and all the financial targets had been missed, Paul and his leaders decided to pay small bonuses anyway – allocating the suddenly scarce resources to their employees. When new recruits noticed that the transition from trainee to employee was a little rough, Beryl created a “buddy system” that assigns a tenured colleague to new employees, helping to ease the transition with informal training and mentoring.
How do you move ahead in your career at Beryl? “The measure of success for your career over time is your adherence to our five core values,” says Paul. His staff backs that up in big ways (by shaping annual review processes around cultural competency) and small ways (by awarding premium parking spots to employees “caught” exemplifying the values).
Schein also identified secondary mechanisms for articulating and reinforcing culture in organizations. He said to look at the organization’s design and structure, systems and procedures; at the rites and rituals; the design of the physical space; the stories, legends and myths of the organization; and the formal statements of philosophy, values and creed. Beryl knocks it out of the park in these ways too. Just one example: at most call centers, shift workers share cubicle space. At Beryl, every worker, on every shift, has their own desk they can personalize (and boy do they). It gives them a place of their own and a sense of belonging in the office.
As an organizational researcher, a few days spent in a company like Beryl is a gold mine. We’ll visit 29 more companies like Beryl as part of the Return on Values project – and through the process we anticipate certain themes will emerge. We’re exploring cultures of excellence, as I’ve highlighted here, but also community engagement, customer loyalty, leadership style, and (importantly) business success as seen in revenue, growth, and job creation.
At the end of this process my hope is we’ll have a clear list of “must do” items that entrepreneurs can follow to embed a strong culture, grow customer loyalty, and outperform their peers. In the future, CEOs like Paul won’t have to stumble onto the right processes and procedures: they’ll have a clear set of guideposts to follow.
____________
Dr. Jim Ludema is the principle investigator for the Return on Values project and the director and co-founder of the Center for Values-Driven Leadership at Benedictine University. He is a professor of leadership and change.
Previous ArticleNext Article