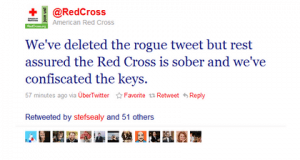 Social media’s biggest asset is also its biggest problem: it’s public. Very public. Mistakes made there can echo around the world – literally – changing a good business day into a bad one in 140 characters or less.
Companies that attempt to firmly control their social media interactions won’t meet their goals. You cannot win with tight-fisted control. Facebook statuses or Tweets that don’t feel genuine don’t get liked or re-tweeted: they are dead on arrival.
Balancing a human voice with your corporate protocol is made easier by making sure your social media always reflects your organizations publically adopted values. Checking the posts against these values – even using a formal check list process – can save some headaches, and mitigate others.
Overlook this, and you might find yourself with a headache you could have avoided.
We’ll explore the lessons several large companies have learned from their social media snafus in this series on Social Media and Values. These nightmares befall good companies, and so our objective is not to vilify an organization but rather to keep others from repeating the same mistake. As you’ll see throughout this series, the smartest companies learn their lessons and are nimble enough to recover with grace:
Nestle | Lesson 1: Don’t Get Snarky
In March of 2010, Nestle posted what seemed like a reasonable request on their Facebook page: please don’t adapt the Nestle logo and use it for your profile picture.
Facebook erupted with cries of “Big Brother!” and reminders that, in the online world, logo adaptation is actually a sign of flattery. Rather than taking a diplomatic approach, Nestle bit back in a tone that could best be described as snarky: 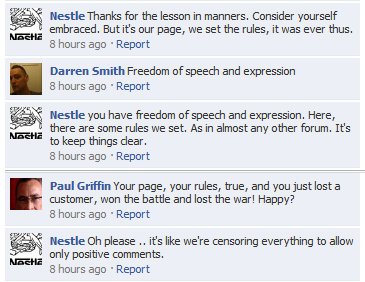 (Image from the website Bnet.)
As I’m sure the senior leaders of Nestle would agree, this is not the tone of voice that should be taken by a company who, according to their core values, aspires to understand, anticipate and fulfill their customer’s needs.
While snarky posts may have their place on your personal Twitter feed, they never belong on a corporate social media network. Nestle knows that now.
American Red Cross | Lesson 2: Do Have a Sense of Humor
The website Synnd tells the story of a similar Red Cross debacle, now known as GettingSlizzerd. Earlier this year an American Red Cross employee accidentally posted a personal tweet on the corporate feed: 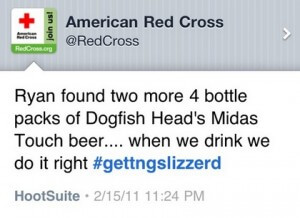 American Red Cross’s values  include that of stewardship – but good stewardship of those four packs of beer was probably not the message the non-profit meant to communicate via their Twitter feed.
In many cases this sort of egregious error would have resulted in a scandal, with at least one employee losing his or her job. Red Cross chose instead to respond with humor:
Social media audiences are understanding: mistakes happen. Respond quickly and show a sense of humor, when appropriate. I think we can all rest easier knowing the Red Cross – America’s first responders – has things under control.
Return to our blog next week for more on Social Media and Values.
—————————————————————————
Author Amber Johnson is the CVDL’s corporate relations and social media advisor, and a non-profit and small business communications specialist.
——————————————————–
Previous ArticleNext Article