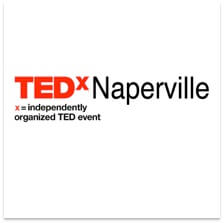 Join the CVDL at TEDxNaperville on Friday, November 6

The Center for Values-Driven Leadership is a sponsor of this year’s TEDxNaperville, an independently-organized event patterned on the format made popular through TED Talks and events.

Learn more about TEDxNaperville in their press release, below, or visit www.tedxnaperville.com.

What do an Olympic gold medalist and a germ scientist have in common?

Naperville (October 5, 2015, 2015) – TEDxNaperville is an annual free-thinking conference that brings the brightest minds of Chicagoland and beyond to Naperville to share ideas worth spreading. The conference will be held Nov. 6 from 1pm-7pm at the Yellow Box, Naperville.

Since its inaugural conference in 2010, they’ve become the longest-running independent TED conference in the Midwest with over a quarter million talk views and thousands of previous attendees. “It’s the Lollapalooza of ideas,” says TEDxNaperville founder and curator Arthur Zards, “some of those ideas so profound they’ll shift how you perceive the world.”

TEDxNaperville speakers represent a diverse collection of local forward-thinkers including:

For more information and to register, go to www.TEDxNaperville.com. The program cost ranges from $75 per ticket purchased before Oct. 31 and $85 after Oct. 31. The cost includes one TEDxNaperville Adventure (included with admission price based on availability) and a reception following the event.

About TED TED is a nonprofit organization devoted to Ideas Worth Spreading, usually in the form of short, powerful talks (18 minutes or fewer) delivered by today’s leading thinkers and doers. Many of these talks are given at TED’s annual conference in Vancouver, British Columbia, and made available, free, on TED.com. TED speakers have included Bill Gates, Jane Goodall, Elizabeth Gilbert, Sir Richard Branson, Nandan Nilekani, Philippe Starck, Ngozi Okonjo-Iweala, Sal Khan and Daniel Kahneman.

TED’s open and free initiatives for spreading ideas include TED.com, where new TED Talk videos are posted daily; the Open Translation Project, which provides subtitles and interactive transcripts as well as translations from thousands of volunteers worldwide; the educational initiative TED-Ed; the annual million-dollar TED Prize, which funds exceptional individuals with a “wish,” or idea, to create change in the world; TEDx, which provides licenses to thousands of individuals and groups who host local, self-organized TED-style events around the world; and the TED Fellows program, which selects innovators from around the globe to amplify the impact of their remarkable projects and activities.