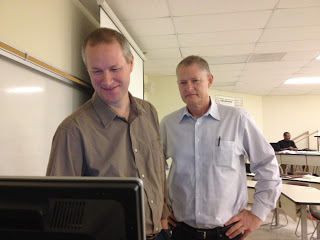 Dr. Rodney Ludema, a senior economist with the President’s Council of Economic Advisers and a professor at Georgetown, recently taught executive students at Benedictine’s doctoral program in values-driven leadership.

As part of his presentation to the students, Dr. Ludema shared three trends business leaders should consider when thinking about the global economy. Find his thoughts in the three minute video below, part of our Champions of Responsible Business video series.
Ludema’s appointment, which officially begins at the end of August 2012, is the latest accomplishment in a distinguished career focused on international trade and the political economy of trade policy. He has an extensive record of academic publications and is the recipient of a National Science Foundation grant. Professor Ludema teaches at Georgetown in a joint appointment with the School of Foreign Service and the Department of Economics.
Dr. Rodney Ludema was on Benedictine’s campus in early July to instruct the 22 executive students in the doctoral program in values-driven leadership. He taught on international economic policy and its implications for leadership. “These students are more mature and have more experience than many of the students I’ve been teaching, but they are also really interested in the human side of business and management. That’s refreshing,” says Dr. Rodney Ludema. “I talk about global economics, and they’re interested in how that impacts people, and what people can do in response to some of these things – it’s a really nice give and take. I’ve learned a lot from listening to them.”
Ludema was hosted by Benedictine professor Dr. Jim Ludema; the two are brothers. “I couldn’t be more proud of Rod’s success,” says Dr. Jim Ludema. “It is a significant opportunity for the executives in our program to learn from one of the nation’s leading economists – from someone who has the ear of President Obama.”
Previous ArticleNext Article