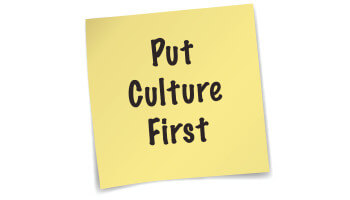 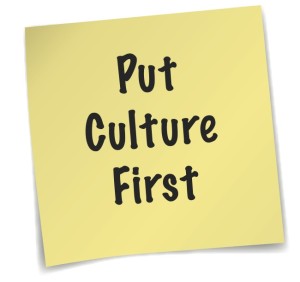 On the topic of workplace culture, it seems most leaders fall into one of two camps: those that think constantly about culture, and those who never give it thought. Increasingly, the “think about it constantly” camp is growing.

In 2014, Merriam-Webster, the dictionary people, named “culture” their word of the year based on an increase in look-ups and use. Taking a strong, directive role in organizational culture could be seen as “trendy.” The leaders we study know it goes much deeper than that.

“This term culture can be sort of a buzz word today in business,” says Ron Alvesteffer, President of Service Express Incorporated. “You hear of Google and the foosball tables, the air hockey tables, bring your pet to work, do your laundry, do all those fun things.” But, he says, a strong culture is built on more than just fun. “I think where people lose the connection is back to the [idea that] fun drives great business results.”

In the companies we study, the strong cultures drive business results and create an effective, productive workplace. Bob Hottman of Colorado’s premier accounting and consulting firm EKS&H says that after serving as CEO of the accounting firm for years, there is not much that keeps him up at night. “But part of that’s because the single most important thing to me as a CEO in the organization is our culture,” he says. “And if I was concerned that the culture was not totally aligned with where we want to go and our values that would keep me up at night.”

For CEOs who want to take a values-driven approach to business, putting culture first is job number one. Our research through the ROV Project is building the business case to demonstrate that strong, positive cultures do contribute to a more profitable, more sustainable, more successful business. CEOs like Hottman and others know this, and invest significant time and resources in building and shaping culture because it improves outcomes of measurable success.

“Managing the culture is my chief responsibility now,” says Tom Walter of Tasty Catering. Why? Because it’s the clearest leverage point for success he knows.

In a very small company, the founder’s character and personality usually defines the culture of the organization. But as companies start to grow, the culture begins to take on a life of its own. Many leaders find the transition from “the culture is me” to “the culture is a living organism of its own” happens around 50 employees.

Does this let the leader off the hook? Not in the least.

This post is excerpted from our e-book, Do Differently: How CEOs of Values-Driven Companies Spend their Time. Download your free copy.

In every executive interview our research team has done through the Return on Values Project, the CEOs and presidents have made clear that the culture is their business, regardless of the size of the organization. It may have a life of its own, but the CEO takes care to model it, shape it, and celebrate it on a daily basis.

The days of the corner office earning you a pass on good behavior are gone. Ron Alvesteffer of SEI illustrated this with a story. His father, who had spent his career at GM, came to visit Alvesteffer at SEI’s office, where he saw his son’s car parked in the most remote corner of the lot. “How come you don’t have a parking space right up in front that says President?” he asked his son.

“That’s so old school,” Alvesteffer answered his father. “What, am I going to tell my employees that I have to park up close and I have the shortest walk to the door? They’re the ones doing the real heavy lifting during the day … I’m way in the back there in the leadership lot.” For Alvesteffer and his executives, the choice of parking spots modeled the culture’s focus on service to the entire team.

As a leader, the best way to make your values meaningful is to invest time, money, energy, and intellect into building a values-driven culture. We’ve noticed several important habits among the high culture/high profit executives we study. These habits reflect management guru Edgar Schein’s research, and include:

Those eight habits are an incredible starting point for executives who want to build strong, positive workplace cultures. The following five tips offer additional, tangible tasks to focus on as you build an organization whose culture is optimized to engage employees and drive success.

How are you doing this in your own work? We’d love to hear your stories – please share in the comments box below. 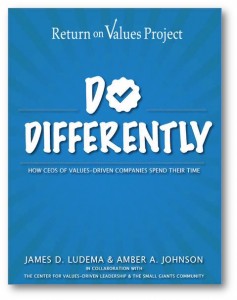 This post is excerpted from Do Differently: How CEOs of Values-Driven Companies Spend their Time, an ebook by Jim Ludema, Ph.D., and Amber Johnson. Download your free copy at www.cvdl.org/different.

The book features research conducted by CVDL faculty, doctoral students and staff. Learn more about the Return on Values Project at www.returnonvaluesproject.com.

Interested in participating in this sort of research? Visit www.cvdl.org/doctorate to learn more about our executive doctoral program, which allows students can get involved in world-class research.