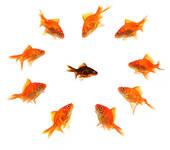 It is not our differences that divide us.  It is our inability to recognize, accept, and celebrate those differences.  ~Audre Lorde

Lately I’ve been thinking that it’s not the obvious differences that make getting along difficult; it’s the subtle differences that get under our skin, just simply annoy us, and probably make us a little judgmental. I’ve heard a lot of people say they are accepting of people who are different, but then I see behavior that tells another story. I’d suggest first that their definition of acceptance may really be tolerance. And second, I’d suggest that the understated differences in perspective and approach are what make us most irritated at the end of the day.
I was reminded of this recently in a conversation with my financial advisor.  I was describing some of the work I’ve been doing in consulting and coaching and he said the most critical lesson he’d ever learned was that people really are different. While that sounds simplistic, it’s really quite insightful. In his case, for example, he recognizes that everyone has their own unique comfort level when it comes to their money. As he described me, some people like to keep a sizeable amount of money in their money market account so they have quick and easy access to cash, if necessary. While others, are okay to leave a rather small amount in their money market so they can immediately funnel any excess into their investments (which are not as readily accessible). He doesn’t tell people what is the right way. Instead, he spends time learning their comfort level and then does his best to work with them within that framework. In other words, he recognizes, accepts and then celebrates his clients’ differences.
In organizations I see leaders who get frustrated when others aren’t sharing their perspective. For example, some leaders want to keep as many options open as possible and not be too confined by a narrow focus. However, their executive team may have a differing perspective and crave a specific focus so they can attack it. In other cases I’ve seen the overall pace, or at least perceived pace, cause angst among leadership teams. And I’ve had leaders say to me, “it would be a lot easier if everyone just thought the same way I do.”
Hillary Clinton said, “What we have to do…is to find a way to celebrate our diversity and debate our differences without fracturing our communities.” While she was speaking on a more global level, I think the sentiment of that statement can certainly apply to organizations, both large and small.
Do we celebrate our differences or do we tolerate our differences and let them fracture our organizations over time? Synonyms for tolerate are stand, bear, put up with, endure, and stomach. Not exactly a culture most of us would want to be part of on a daily basis. Whereas synonyms for celebrate are rejoice, party, have fun, and enjoy yourself. That certainly creates an image that would make nearly everyone excited about showing up at work on Monday morning.
As leaders, are we celebrating differences or tolerating differences, even the subtle ones?
———————————————————–
Dr. Kathryn Scanland is the president of Greystone Global LLC, a consulting firm focusing on strategic planning, leadership development and organizational design. This post is republished with permission from Tuesday Mornings.
———————————————————–
Previous ArticleNext Article