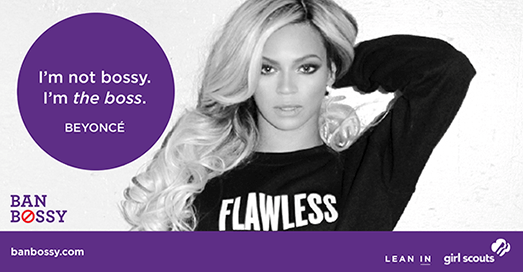 Like almost every woman who was once a girl with some backbone, I’ve been called “Bossy.” The oldest of three, I took great pride in commanding my brothers, being quick to tell them what to do, and even quicker to remind them of their shortcomings. “Little Miss Bossypants” was a moniker that would have fit, though my memory is too shaky to say for sure that it was used.

My parents had the good sense to remind me that my role was not to be the demanding and confrontational overseer of my younger brothers. Whether by luck or intention, their good sense had the effect of making me a more caring and other-focused individual, without squelching my natural leadership capacity.

I’ve thought a lot about this over the last week, since the Ban Bossy campaign, a partnership between Sheryl Sandberg’s Lean In organization and the Girl Scouts, emerged as a lightning rod in the media. The campaign is really about making an intentional effort to build leadership capacity among young girls by making it okay for girls to show leadership. As one popular Wall Street Journal article hinted, we should identify this capacity in girls not as “being bossy” (which implies we should soften ourselves and take a back seat to the real action) but instead as “executive leadership skills.”

In the last week, the Ban Bossy campaign has taken a lot of heat from women and men who say the campaign is misguided: we need to teach girls to embrace their inner CEO, to embrace the identification of being bossy.

Critics of Ban Bossy have missed the point, I believe. They’ve missed it for a semantic reason: we want girls to grow up to be the boss and putting the word “ban” so close to “bossy” can easily misdirect the casual reader. (It also gives fuel to bloggers looking to be critical of any popular movement, as a way of driving traffic for their own posts.) But there’s a difference between “bossy” and “boss.” Do we want girls – or boys – to grow up to be bossy?

I have a clear memory from my college years: sitting on the floor of the student union next to the president of the student body, a student we’ll call Peter.  I don’t remember what prompted the conversation, but at one point Peter looked at me and said, “You’re not really much of a leader, are you?” At the time, I was the editor of the school newspaper, an active leader in way too many student groups, and making straight As. How could I not be seen as a leader? I wondered as I struggled to respond.

I operate on a different definition of leadership. For me, leadership means setting an example. It means inviting others to follow. It means bringing all the voices into the room. Sure, sometimes a leader has to take charge: you have to set the path, you have to make a difficult decision, take a risk. Not everyone will always like you. But you don’t have to be bossy.

In this, leadership is really well reflected in the partnership between Lean In and the Girl Scouts. Being a leader requires “leaning in,” but it also requires building your skills and capacity over time, in a team approach, much like the Girl Scouts enables thousands of young girls to do each year.

Do I want to Ban Bossy? Absolutely. “Bossy” makes for terrible leadership. Let’s teach our girls – and boys – to lead, not to command. And while we’re at it, let’s learn that lesson ourselves. Few people will choose to follow a bossy leader. But give me a leader who listens, who challenges, who pushes me to succeed and I’ll happily follow. That’s the sort of leader I want to be, and the sort of leader I hope my children (a boy and a girl) grow up to be.

Amber Johnson is the corporate relations advisor for the Center for Values-Driven Leadership, and the mother of a seven year-old son and a four year-old daughter, both who have “executive leadership skills.”

More on Women in Leadership from the CVDL