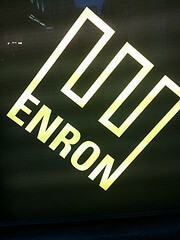 Don’t get me wrong. I don’t believe that the utter failure of Enron was a good thing for its employees, its customers or any of its stakeholders. Tens of thousands of people were negatively impacted, and many were horribly wronged by the recklessness of a few of the company’s leaders and their corrupt inner circle.
So why might one think, as the title suggests, that the failure of Enron was perhaps a good thing?
First, it should be stated that by “good,” I mean it in the sense that often when “bad” things happen, there is a paradoxical result of something of benefit later arising out of the bad, which is a positive change that might not have happened otherwise.  So from this narrow viewpoint alone, I do think some good has resulted from the tragedy of Enron.
Corporations participate in the construction of meaning that we, as individuals, sense and acknowledge around us.  As such, the incredible level of deception that a few top leaders were able to get away with for so long should (and did) make most all of us pause in awe.  There was certainly something to be learned about how we had been preparing — or were ostensibly failing to prepare – future business leaders of the corporations and firms that are the primary engines of a free society, regardless of size, to lead from an ethical base.
Second, I think that beyond the deception itself, the very fact that comparatively so few within the firm seemed to be actually aware of what had been going on, stuns us into disbelief.  This disbelief propels us forward, as a society, towards new learning and subsequently, some new positive and beneficial action.
Many would point to Sarbanes Oxley as one of the “new” actions.  I, however, would describe the enactment into law of stricter and more prescriptive regulations as a reaction – not a new action.  And while I suspect that for some time to come it will continue to be debated as to whether or not the new regulations were the right and best response (including also if “ethical” behavior could be achieved through some governmental mandate), I still offer that a regulatory response was reactive, regardless if one believes the new regulations were needed or not.
So what non-reactive response or new actions have occurred?  I think it can be summed up in two words:  radical transparency. The failure of Enron, and especially the unbelievable level of unethical behaviors undertaken by its corrupt leaders and their accomplices, literally shocked us all, jolting us into wanting and demanding transparency not only in financial auditing and reporting related to publically-traded companies, but at all levels across our society.
And this I believe to be a good thing. We need ready access to information related to publically-traded companies, publically supported institutions, publicly-funded projects, and in fact all decision-making and actions taken by government itself. Without this information, it is impossible to shine a light into dark corners. Information helps us to clarify, understand, and give meaning to the past, while simultaneously providing us a basis on which to construct meaning presently and for the future.

So was the collapse of Enron a good thing for any of its stakeholders? Certainly not in the classical sense of the word good. But this unbelievably bad event in U.S. corporate history may have led to tremendous benefits, which otherwise might have never come about. For that, we can thank Enron for its contribution to radical transparency across all levels.

Anna Amato is the President and CEO of edtec central, an educational consulting firm based in Michigan. She is a student in Benedictine University’s Ph.D./D.B.A. program in Values-Driven Leadership.
——————————-