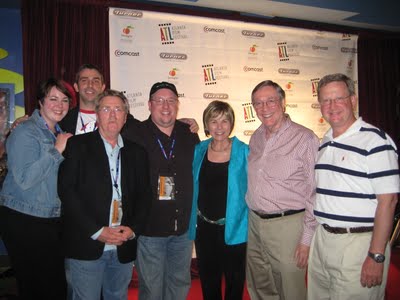 I received the e-mail yesterday afternoon at 4:42 that I had been expecting, but hoped would not come. Subject line: Ray C Anderson 1934-2011. The e-mail from Dan Hendrix, CEO Interface began…”It is with a heavy heart that I am writing to let you know that our beloved founder and chairman passed away today.  He was at his home, surrounded by family and friends.   Ray waged an epic battle against cancer that reflected his strong spirit and his tenacity….”

Ray Anderson will be remembered by the world as a sustainability pioneer.  A man who “got it” before most, a passionate crusader for what he believed.  Through his gift of storytelling, he informed us, charmed us and inspired us to join his cause. He leaves his mark on the world as an entrepreneurial thinker and as a major force in redefining outdated industrial business models. Certainly important parts of the Ray Anderson legacy.

The last time I saw Ray was in May 2011 at an innovation summit we were facilitating for Interface. Though he was deep into his fight against his cancer, he was there, still very engaged in shepherding his third child’s journey to the top of Mt. Sustainability (he always talked about Interface as this third child, after his two daughters). For those of you who are not familiar with this term, Mt. Sustainability is a metaphor that reflects the sustainability vision Ray set forth in 1994 for Interface to have zero footprint on the earth by 2020. A vision with a deadline, that was Ray, true to his engineering roots.

Perhaps the most poignant moment at the summit came at the end when we asked participants to make a commitment statement around the work we had done over the 2-days. Ray’s statement reflected his commitment and tenacity. “I commit to fighting this cancer so I can be here [to] see us reach the top of Mt. Sustainability.”

Ray, somehow, I think you will be waiting for us at the top.

While Ray inspired me with his sustainability vision, it was Ray Anderson the person that impacted me most. I first met Ray in 2004 when I asked him for help with a research project I wanted to do. I was interested in the emerging concept of sustainability and wanted to study the Interface journey to becoming a sustainability-focused company. After listening to my request and asking a couple of very direct questions (which I came to learn was part of any conversation with Ray) his response was simple and straightforward,  “I think I want to help you.” He never wavered from that commitment. He helped me with that research project and beyond. In his quiet way, he paved the way for opportunities I would have never had. He always made time in his amazingly busy schedule to talk with me.  When I try to explain to people what made Ray so special, I often begin by saying “he answers every e-mail I send to him, and usually within a couple of hours”—which in a strange kind of way sums up Ray.  A man of integrity who didn’t just talk about commitment, he lived it.

While he was a rock star in the sustainability world, I will remember Ray as a friend and mentor.  He was a consummate southern gentleman who helped me realize a dream.  Thank you Ray, I hope I can give back to others even a small portion of what you have given me and I promise I will always remember my responsibility to Tomorrow’s Child.

Tomorrows Child
© Glenn Thomas*
Without a name; an unseen face
and knowing not your time nor place
Tomorrow’s Child, though yet unborn,
I met you first last Tuesday morn.
A wise friend introduced us two,
and through his sobering point of view
I saw a day that you would see;
a day for you, but not for me
Knowing you has changed my thinking,
for I never had an inkling
That perhaps the things I do
might someday, somehow, threaten you
Tomorrow’s Child, my daughter-son
I’m afraid I’ve just begun
To think of you and of your good,
Though always having known I should.
Begin I will to weigh the cost
of what I squander; what is lost
If ever I forget that you
will someday come to live here too.
*Glenn Thomas was an employee at Interface. He wrote this poem after hearing Ray give a speech about his sustainability vision. Every speech I heard Ray give ended with these words.
Previous ArticleNext Article